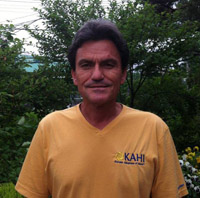 Bok-dong Yoon was born on April 7, 1952 in Busan, South Korea, and adopted through Catholic Social Serviices (now called Catholic Charities) in January, 1957. He is the eldest of 13 siblings of whom 8 are adopted (5 Lakota Indians, 1 Samoan sistah, and 1 brother from Incheon. Bok-dong moved to California in 1966, joined the Marine Corps in 1972 (during Vietnam War), and left in 1973 with a 'Disability Discharge Under Honorable Conditions' due to his becoming a  pacifist. He has since traveled to Saudi Arabia, Palestine, Cuba (to visit), and to Europe. In July 1989, he went to the Democratic Peoples Repulic of Korea, participating in the 1st International Peace And Reunification of Korea. He returned to Hawaii in late 1992 and has been involved with peace and Justice organizations supporting Hawaiian sovereignty, anti-war struggles.